Skip to content
Investment travel guide: why your portfolio could take you to Palmerston or the Mount

But it doesn’t map out the route for them.

“And that’s because we started with the premise that most InvestNow clients would probably be experienced, self-directed investors – or even advisers,” InvestNow founder, Anthony Edmonds says.

However, Edmonds says a surprising number of novice investors have signed up to InvestNow with many of them searching for further guidance on how to build a diversified portfolio of funds.

“Clearly, InvestNow isn’t licensed to provide financial advice so we aren’t in the business of telling people which funds they should invest in, which limits how we can answer some of the questions that come through the site,” he says.

Regardless, there are some broad principles investors can apply to their investment route-planning process that generally include:

“Without that map, you’re really just driving around randomly admiring the scenery,” he says. “While ultimately you might get somewhere great, you could equally end up in Palmerston North, when you were secretly hoping for Mount Maunganui.”

As Edmonds points out, there are plenty of online tools and calculators to help investors figure out some of the financial directions.

“For instance, the Commission for Financial Capability’s Sorted website is a fantastic place to start for investors looking to crunch a few numbers and develop some personal financial pointers,” he says. “The Sorted ‘Investor Kickstarter’, which is embedded on InvestNow, is one those tools that at least sketches out the terrain.”

Based on a number of inputs such as age, assets, debt and self-identified tolerance for price volatility, the Investor Kickstarter lumps you into one of five ‘risk profiles’ ranging from ‘defensive’ to ‘aggressive’.

Essentially, those categories reflect a different mix of ‘safer’ income assets (such as bonds) and ‘riskier’ growth assets (typically, shares).

Sorted, though, won’t tell you where to go next.

“Assuming you’re happy with your assigned risk profile you could just shop around for a fund name that matches that category – like, say, the AMP Capital RIL Balanced Fund we offer on InvestNow,” Edmonds says. “But it’s not always that simple – reflecting there can be quite a variation between different balanced investment funds, as each one has its own nuances.” 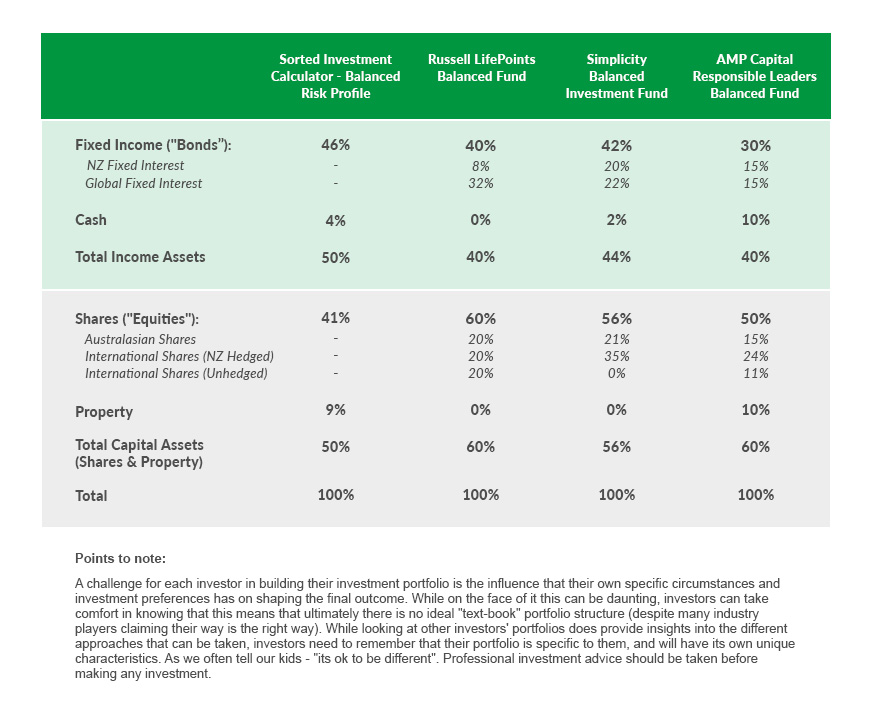 The table above illustrates the diversity of the underlying components within funds lumped under the same ‘balanced’ banner.

“Each fund has a slightly different investment mix, which in turn don’t exactly match the Sorted description – despite being broadly the same,” he says. “And they could all be equally valid routes to the same investment end point.”

According to Edmonds, the differences between portfolios that may sit in the same risk profile is not surprising given the many options open to investment managers and the different skills, market views and philosophies they apply in constructing funds.

“If we turn to our table of balanced funds, those nuances explain the different portfolio outcomes. Each manager has developed a unique long-term benchmark mix of different assets – or ‘strategic asset allocation’ (SAA) – to build an ideal ‘balanced’ fund exposure,” he says. “That is not to say any of the managers are right or wrong, or that their portfolio structure is necessarily better than the other, they are simply different.”

Over the long-term the SAA will be the most dominant factor in driving long-term returns, Edmonds says.

“The SAA broadly limits how far your investments could take you. It could be worth comparing your portfolio with some professionally managed funds to find out your map settings,” he says. “Some people are happy enough going to Palmerston North; but you don’t want to end up there expecting a beach.”

In the July edition of InvestNow Magazine we will look at how you can build your portfolio to get you to your destination and the sector funds that different types of investors use to get to their different destinations.